2012 was the year of Danish TV for me, with The Killing gluing me to my screen, but 2013 was the year for New Zealand to impress. Three seasons of The Almighty Johnsons (IMDB) and the mini-series Top of the Lake (IMDB) have left me eager for more.

Top of the Lake

Starkly beautific natural rural landscapes are juxtaposed with the sheer ugliness of past and present events in the town ironically called ‘Paradise’. One shock after another is delivered like a punch to the gut. Answers are few to begin with. At the end of each episode you’re left pondering the possibilities: rape, paedophilia, drugs, people trafficking, kidnapping, paternity. And everything and everyone is completely fucked up.

A 12-year-old girl walks into a cold lake seemingly about to drown herself, we then find out she’s pregnant and is now sitting in a police station waiting for the female rape specialist police officer, a former resident of the town. Only the child’s response to the obvious question, ‘who’s the father?’ is ‘no one’.

As the police officer investigates and questions the residents, her own traumatic past bleeds through, coming back to haunt her. Her increasing discomfort ramps up the tension and now every man in the area is a suspect for crimes past and present. When the girl goes missing, there’s only mild panic because she’s presumed to have escaped to the woods and is using the survival skills her Scottish, overbearing and powerful but rustic father taught her.

Meanwhile there’s a cargo-container camp of women beaten down by life trying to find themselves again by hitching their wagon to Holly Hunter’s enigmatic silver-haired wise woman. This place was often used a resting point between the civilized law-abiding world and the lawless wilderness. 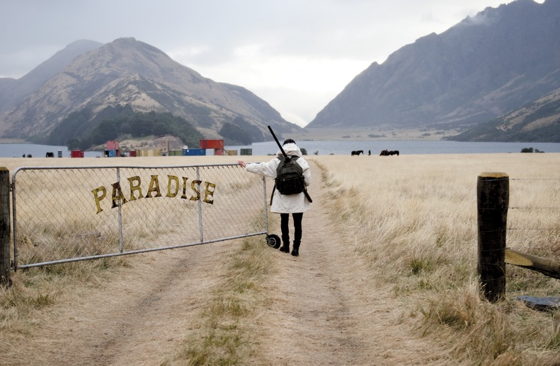 Endings for both younger and older female main characters were jaw-droppers. The former more than the latter. I didn’t anticipate that level of screwed up. I was blinded by the remote and scenic setting and forgot that humans, no matter the size or location of a population, will always have its share of wrong-uns.

ETA: Elisabeth Moss has won Best Actress at the Golden Globes for her leading role in Top of the Lake. Well deserved!

Apart from Odin, Loki and Thor, who really knows anything about the other Norse gods? And let’s face it, the current Thor movies are the reason why those names seem familiar. It’s not the most popular pantheon, Greek probably takes that crown. Have no fear because the Johnsons are here!

They consist of four brothers raised by the eldest and their incredibly young looking grandfather. At 21, each member of their family inherits their reincarnated god alter ego and he or she’s powers. We meet Axl on his 21st and upon going through the ritual everyone is astonished to discover he is Odin. Yes, Axl the drunken lager lout student loser is the all-powerful father of Norse mythology. Hilarity ensues. He’s introduced to the god-sides of his brothers, grandfather and cousin:

Thor is punished for his actions

Female gods are also cast, but for the first season they’re sort of the enemy. Historically sexist patriarchy has apparently alienated the Norse goddesses who are crusading for their own feminist movement by seeking power to rival that of their men. In contrast to the sloppy half-arsed male gods, these goddesses are portrayed as smartly dressed intelligent goddesses, but even they get it wrong sometimes.

God traits, stories and prophecies all have an impact here, which spectacularly evident in the embodiment of Loki. Perfect casting for him. He’s a bloody tricky bastard, and the guy playing him really works it. Charming, devious and kind of an arsehole. Smug and self-satisfied. I love him. And Anders.

There’s something seriously wrong with me.

The Almighty Johnsons (watched on Syfy UK) and Top of the Lake (watched on BBC UK) perfectly compliment each other. While the Johnsons is mostly town-based (apart from god rituals in the woods), Lake was rural. Johnsons was light-hearted, sexually brazen, laid back mythological urban fantasy. Lake’s atmosphere was dark, brooding and seriously creepy.

If there are any more Kiwi / NZ exports in future I’d be interested in seeing them, although I vaguely remember watching Shortland Street a decade or more ago, but that doesn’t count. It was a soap, and I don’t watch those now.

1 thought on “New Zealand TV: ‘The Almighty Johnsons’ vs. ‘Top of the Lake’”