What doesn’t The Golden Ass have?

At this point I should probably be comparing The Golden Ass to the brutality shown in Game of Thrones, only this is much less about political maneuvering and Machiavellian plotting, but still, they’re both not for the faint of heart. The Golden Ass is one of the first, or the first, human-to-animal transformation stories that run in the same vein as Disney’s Brother Bear and The Emperor’s New Groove.

With all of the beatings Lucius received as a helpless slave in donkey form, carrying loads too heavy for his four-legged form, having his fur set on fire, never allowed rest when he most needs it and forced to continue on or have his feet tied together to be hurled off a cliff – because that’s what they did to lame animals – I feel like I need to donate to The Donkey Sanctuary.

For a 1,900 year old novel, you realise that nothing’s really changed in that time, socially speaking.

Sex scenes are surprisingly good. There’s no hesitation. No repressed sexuality. No self-esteem issues. And all manner of positions are attempted.

‘The only redeeming feature of this catastrophic transformation was that my natural endowment had grown too.’

Typical man. Turned into a donkey and he’s impressed with the increase in the size of his manhood.

Yelling ‘FIRE!’ when being burgled and in need of help:

‘Then, leaving him there fatally crucified, he climbed to the roof of his hovel and shouted at the top of his voice to summon the neighbours; calling each one by name he gave out that his house had suddenly caught fire, reminding them that this involved the safety of them all. So everybody, frightened by the danger next door, came running in alarm to help.’

Well, it’s been proven. Video games don’t make kids violent, a lack of video games does. Imagination is a dangerous thing. So many inventive ways to torture and kill, to humiliate and degrade. The devil makes work for idle hands, as they say. So parents, quickly stuff a Playstation controller into your little one’s hands before they turn their minds to dastardly deeds.

Certain aspects of The Golden Ass really do get you thinking about contentious issues.

How do you define bestiality? Lucius is a man turned into a donkey. When it’s proposed that he’ll be allowed his choice of horses with which to procreate – is that bestiality? Is Lucius’s fornication as an ass with a human woman bestiality? Does the fact that he has a human mind inside an animal body change the status of the sexual relationship?

Surprisingly, Apuleius doesn’t deliver the stereotype paedophile. A lusty married woman sets her sights on her stepson. Oddly this is labelled incest though there appears to be no blood connection. And it’s the same with rape. A cuckolded husband rapes his adulterous wife’s toyboy lover as punishment. Perhaps male paedophiles and rapists were stereotypes even 2,000 years ago.

The feminist in me feels compelled to point out the unbalanced female representation. Many women were demonised as witches who pee on men’s faces, who steal body parts from the dead, who are complicit in evil deeds, who are nymphomaniacs, adulterers, paedophiles, vain and jealous grudge-holding goddesses. Psyche (myth), Photis (Lucius’s servant lover) and Byrrhena (Lucius’s aunt) are the only exceptions. 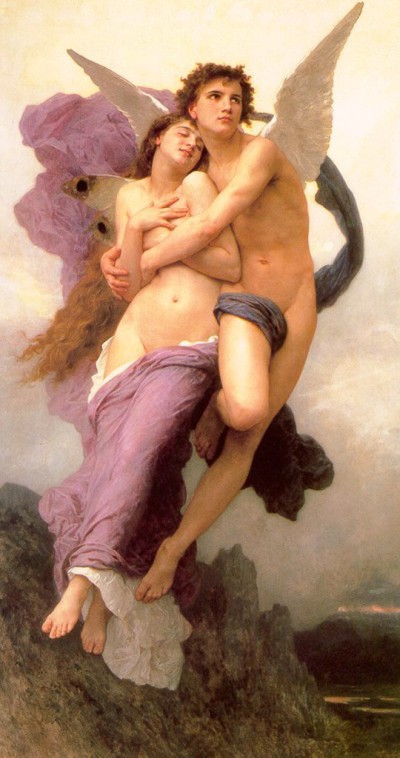 The Abduction of Psyche by William-Adolphe Bouguereau

During Lucius’s journey, the stories he hears are mostly told at the dinner table, around the fire, as a distraction on a long journey, or as a comfort to distraught kidnap victims. Understandably storytelling was their main form of entertainment. Well, that and gossip, which was free or you provided a meal for the teller. I really enjoyed the mythical telling of Psyche and Cupid.

Each of the 11 ‘books’ are self-contained chapters of about 20 pages with a spoiler-y summary of what’s to come at the beginning, so it was easy to dip in and out. I wasn’t particularly happy with the ending, in fact I skimmed and skipped around at that point. I can understand Lucius’s gratefulness at the chance to become human again, and I’m aware of that ancient tradition of ‘a life saved, is a life owed’ [see Azeem of 1991’s Robin Hood: Prince of Thieves], but I have an issue with blind faith. Lucius walks away from his previous life to devote himself and his future to worshipping his rescuer. That’s just weird, from my 21st century non-religious perspective.

The translation very much played a part in my enjoyment of this ancient novel. I carefully researched which was right for me. I chose the Kenney edition as it seemed the least stilted of those available, and I’m glad I made that choice.

My funny mishap in trying to find a copy of The Golden Ass.

*Read as part of The Dead Writer’s Society’s Around the World challenge.

5 thoughts on “The Golden Ass: Or Metamorphoses by Lucius Apuleius”