My read for Banned Books Week was certainly apropos. Fahrenheit 451 shows you the results of a book banning society. A scary, ignorant and shallow world where brutality and casual violence are everyday events done in the name of entertainment; a regressive and disabling move in social evolution, handicapping progression by limiting knowledge and encouraging selfishness.

Firemen are trained to be pyromaniacs. Books are kindling, nothing more. Fire is the desired state. How you get there doesn’t matter.

Find only one book? Tear the pages out. Feed them to the flames a few at a time to make the glorious fire last longer.

Find a pile of books in a house? Set fire to the house. The building itself is fire-proof, as all buildings are, so light that sucker up. Does it matter that the owner is still in the house? No. They’re criminals. They’ll probably kill themselves. Or be killed by the robotic book sniffer “Hound” with its lethal injection.

Firemen don’t challenge the status quo. But, inevitably, they do. At some point, a book falls open on the job and eyes automatically read a sentence.

A book is stolen and hidden. Maybe more than one. Once read, they’re to be incinerated. 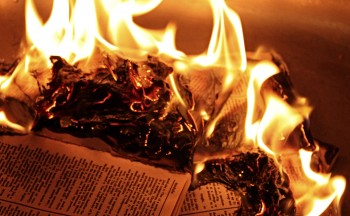 And then go back to work as a Fireman, more dedicated than ever. Ridding the world of nonsense and fakery of the highest order.

Except Guy Montag doesn’t comply with those last three sentences.

He starts to wake up, starts asking questions.

Montag’s desire to learn drives him to seek out an erudite stranger he once met. Faber educates him on the importance of books.

“Number one, as I said, quality of information. Number two: leisure to digest it. And number three: the right to carry out actions based on what we learn from the interaction of the first two.”

Using an agricultural metaphor (there are many metaphors), Faber describes how people are being bred without roots, without sufficient nourishment, and so perish easily. Neglectful parenting through selfishness breeds spiteful children who hate their parents as much as their peers. Growing up in ignorance and fear of anything remotely cerebral doesn’t make for happy people. In comparison to the minority of educated hobos who’ve memorised books (“bums on the outside, libraries inside”), the majority are empty shells devoid of life, tumbleweed drifting inside their heads.

As a timeless classic, some of 451‘s predictions are reality in the 21st century.

“I’m antisocial, they say. I don’t mix. It’s so strange. I’m very social indeed. It all depends on what you mean by social, doesn’t it? Social to me means talking to you about things like this.” She rattled some chestnuts that had fallen off the tree in the front yard. “Or talking about how strange the world is. Being with people is nice. But I don’t think it’s social to get a bunch of people together and then not let them talk, do you? An hour of TV class, an hour of basketball or baseball or running, another hour of transcription history or painting pictures, and more sports, but do you know, we never ask questions, or at least most don’t; they just run the answers at you, bing, bing, bing, and us sitting there for four more hours of film-teacher. That’s not social to me at all. It’s a lot of funnels and lot of water poured down the spout and out the bottom, and them telling us it’s wine when it’s not. They run us so ragged by the end of the day we can’t do anything but go to bed or head for a Fun Park to bully people around, break windowpanes in the Window Smasher place or wreck cars in the Car Wrecker place with the big steel ball. Or go out in the cars and race on the streets, trying to see how close you can get to lampposts, playing ‘chicken’ and ‘knock hubcaps.’ I guess I’m everything they say I am, all right. I haven’t any friends. That’s supposed to prove I’m abnormal. But everyone I know is either shouting or dancing around like wild or beating up one another. Do you notice how people hurt each other nowadays?”

“If you don’t want a man unhappy politically, don’t give him two sides to a question to worry him; give him one. Better yet, give him none. Let him forget there is such a thing as war. If the government is inefficient, top-heavy, and tax-mad, better it be all those than that people worry over it. Peace, Montag. Give the people contests they win by remembering the words to more popular songs or the names of state capitals or how much corn Iowa grew last year. Cram them full of noncombustible data, chock them so damned full of ‘facts’ they feel stuffed, but absolutely ‘brilliant’ with information. Then they’ll feel they’re thinking, they’ll get a sense of motion without moving. And they’ll be happy, because facts of that sort don’t change.”

These realized predictions seemed to have formed the reason, at least in part, for Ray Bradbury’s stubborn reluctance to not publish Fahrenheit 451 in e-form.

“…to hell with the internet. It’s distracting,” he said. “It’s meaningless; it’s not real. It’s in the air somewhere.”

That is until Bradbury couldn’t get a new publishing contract without selling the ebook rights. Some would say ‘money talks’ but that simplistic conclusion doesn’t take into consideration the importance of the message contained within his pages – knowledge belongs to everyone, don’t let anyone leave you in ignorance. Spreading that message is arguably a better reason to publish more widely than naked, capitalist greed; though I’m sure the money helps, too. 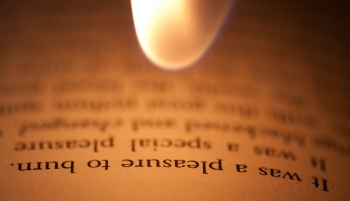 It was a pleasure to burn read. (Ha!)
photo credit: gcfairch

I can certainly understand Bradbury’s worry over the impermanence of an ebook, and the ease with which someone could delete or change an e-copy, leaving not a trace of the crime, unlike the ashes of a burnt book or the remnants of a torn out page.

While I’ve not yet seen an adaption of Fahrenheit 451, I feel like I’ve seen one. Equilibrium embodies everything that this book represents. Emotion is outlawed (by a suppression drug), as is art in every form. Colour is black, white or grey. Red is reserved for criminals found in possession of emotions and contraband, worn for the green mile walk. Art works are burned, and so are their owners. It’s not the quickest death.

We follow enforcement officer Christian Bale working for a totalitarian government when one day he notices his partner saving and hiding a poetry book instead of turning it in for incineration. Even now I can remember Sean Bean’s final scene quoting Yeats.

“But I, being poor, have only my dreams;
I have spread my dreams under your feet;
Tread softly because you tread on my dreams.”

Not long after, Bale accidentally misses a dose of the emotion-suppression drug. Suddenly his investigation into his (now dead) partner and the resistance take on new meaning. Bale is Bradbury’s Montag. Just as Montag lost Clarisse, Bale loses Bean.

Their deaths are the catalysts for the following rebellious actions. And just as the Firemen burn pets so do Equilibrium’s enforcement officers. Murder isn’t taboo in either society. Of course, it isn’t called murder, but it’s murder all the same.

Something as simple as a puppy licking his face inspires Bale’s character to save it via a bloody and dramatic gunfight. Yes, Bale solves his problems with guns and Montag with a flamethrower. They both witness the downfall of their prospective societies, although Hollywood ensures Bale is the architect of that downfall whereas Montag is a passive observer.

Endings and the downfall of society 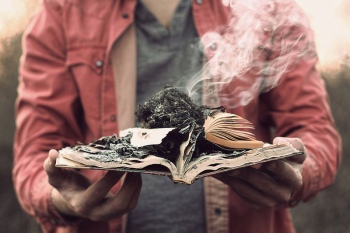 “But you can’t make people listen. They have to come round in their own time, wondering what happened and why the world blew up around them. It can’t last.”

Bradbury gives the reader hope for a better future throughout 451, in particular on the Fireman’s uniform itself. On it is the salamander who’s thought to live in flame and is therefore unaffected by it, and the phoenix – the mythological creature that is reborn from the ashes of the fire that killed it. Bradbury uses the phoenix as the final image in the closing pages by through one of the educated hobos who tells its story and promises that one day they’ll break the endless cycle of the rise and fall of civilizations, by finally learning from the mistakes of the past so they won’t be doomed to repeat them.

Why I loved Fahrenheit 451

I loved Fahrenheit 451. So much so that I used a pencil to underline the best bits which prompted my mother to ask, “Are you feeling alright?” because damaging a book in any way is anathema to me, but I felt compelled to highlight its treasures. Much of the book is underlined. It spoke to me as a book lover. Each time I came across a quotable quote I’d think, ‘Yes, this is why I read.’

The things you’re looking for, Montag, are in the world, but the only way the average chap will ever see ninety-nine per cent of them is in a book.

Despite the short length it took me a while to read it. Sometimes I re-read passages or an exceptionally observant, poignant or thoughtful sentence. Despite my 5-star rating and applying ‘favourite’ status, it’s not 100% perfect. Almost, but not quite. Less than a handful of vague and somewhat meaningless passages, particularly at the end, stand out as odd because every other part of the book is necessary and concise. This didn’t mar my experience at all, however.

“The good writers touch life often. The mediocre ones run a quick hand over her. The bad ones rape her and leave her for the flies.”

Bradbury is one of the ‘good’ writers.

View this review on Leafmarks.

3 thoughts on “Fahrenheit 451 by Ray Bradbury”