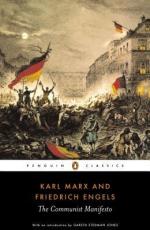 It’s been a while since I studied Marxism at school, a refresh of my memory was required, and having never read The Communist Manifesto, I thought I might as well try it.

My views have changed. When I studied Marxism as a teenager I was enamoured with its idealistic belief that capitalism would inevitably end in revolution and somehow result in a more utopian and equal society. No one could ever accuse me of being an optimist, even back then, but I think perhaps Marx’s revolutionary philosophy played on my pessimistic “the world’s going to hell in a hand basket” outlook and shining a spark of optimistic hope that once society finally crumbles, things will get better.

Ha-ha! I’m older and wiser now. I’ve read Animal Farm. Selfishness, greed and nepotism will prevent any successful utopian attempts at strict and extreme equality, which is basically what communism means. Human nature drives us to climb the step ladder of personal achievement and progress and the ‘keeping up with the Joneses’ attitude to wanting and needing more than our neighbours in order to feel successful, will always stop us from achieving absolute equality in all areas of society.

Intelligence, eloquence, charm – we don’t possess these qualities in equal measures. To a certain degree, they can be learned but we all have our individual gifts and limitations. I once said true equality is impossible to attain. I still believe that. If we can’t establish equality, then equity is the next best thing.

World-altering events precipitate the type of revolutionary change Marx wants. World War II inspired the creation of the NHS – free healthcare to all at the point of use, paid for by the state via general taxation rather than insurance. The NHS, as a socialist construct, makes the UK a mixed economy, rather than a ‘free’ and therefore thoroughly capitalist one, like that of the United States.

World wars, globally devastating plagues, large-scale disasters – anything that wipes out millions of people and threatens human extinction could motivate revolutionary change in the direction of the communist end of the political and economic spectrum.

Short-term change is regularly witnessed at times of crisis. In the aftermath of the UK’s 2011 riots people flooded the streets to start the cleanup. Ordinarily people have to paid to clean the streets while others thoughtlessly drop litter. But in extraordinary circumstances we’ll work together for the common good rather than material gain. Once the short-term goal is met, everything goes back to normal.

Instead of backing the philosophy of the extremist views of communism and capitalism, we should be looking at moderate solutions, solutions which limit the negative impact of capitalism without subjecting everyone to the suffocating nature of totalitarianism.

One example would be implementing laws to limit CEO salaries to a certain multiple of the lowest earners of their business. Say the lowest salary of an employee is £15,000 and the CEO can’t make more than 10x the salary of the lowest earning employee, that means the CEO can’t make more than £150,000 per year, including benefits. This incentivises the CEO to raise salaries of their employees if they should want a raise themselves, as much as the bottom line will allow. Of course, those types of policies require common sense and the cooperation of the most greedy of individuals, likely only possible after that disastrous worldwide event.

I’m stunned at the low quality of this so-called manifesto. No wonder my teachers never recommended reading it. Repetitive to the point of redundancy. It’s a short book made even shorter by its repetitive nature. It doesn’t even have a breadth of subject matter to save it. Blinded by frustration, resentment, and possibly hatred, of Americans capitalists and the bourgeoisie (i.e. the middle and upper classes), Marx and Engels are unable to face the reality of human nature.

‘Our bourgeois, not content with having the wives and daughters of their proletarians at their disposal, not to speak of common prostitutes, take the greatest pleasure in seducing each other’s wives.‘

This should be renamed The Communist Hate-ifesto. If you’re going to encourage positive change, don’t demonise a whole sub-section of society who arguably have the power to make the changes you desire. To have a conversation, at least two people need to be involved. Who’s going to bother listening to the views of those who hate them?

Perhaps Marx and Engels were representing the voices of the often silenced proletariat (the working class) 150 years ago, but these voices are hardly silent now in the age of free speech and the internet. However, you could argue the voices of the underclasses still aren’t being heard by the political class. Criminals, addicts, the unemployed, the disabled, the mentally ill – those that may not have the will, the education or the capacity to make their voices heard but continue to be scapegoats, the omegas in the social hierarchy, who are continually kicked when they’re already down.

However, there are many statements that ring true:

☀ A history of class struggles, with a widening gap between two classes: the middle class and the working class.

☀ Predicting the rise of trade unions and political parties representing the working class, e.g. the UK’s Labour Party, which is largely funded by trade unions.

☀ Anyone familiar with the US’s Republican Party will recognise: ‘Law, morality, religion, are to him [the working class man] so many bourgeois prejudices.’

☀ Britain has an over inflated housing market where only the rich and middle classes can afford to buy a home. ‘…property is alleged to be the groundwork of all personal freedom, activity and independence. Hard-won, self-acquired, self-earned property! Do you mean the property of the petty artisan and of the small peasant, a form of property that preceded the bourgeois form? There is no need to abolish that; the development of industry has to a great extent already destroyed it, and is still destroying it daily.’

☀ Wanting to prevent exploitation of children by parents – children as ‘articles of commerce and instruments of labour.’

☀ ‘The bourgeois see in his wife a mere instrument of production.’ A means to an heir, historically.

A quick analysis of the main tenets of the manifesto

1. Abolition of property in land and application of all rents of land to public purposes.
Not going to happen. (See above for reasons why.)

2. A heavy progressive or graduated income tax.
This works in Sweden. Up to 60% income tax but good quality state-run services.

3. Abolition of all right of inheritance.
This flies in the face of our instinct to provide for our children.

4. Confiscation of the property of all emigrants and rebels.
Shocking on first inspection, but it makes sense that property should only be held by local people. Britain has a problem with rich foreigners buying up all the property, reducing supply and driving up demand and therefore prices.

5. Centralisation of credit in the hands of the State, by means of a national bank with State capital and an exclusive monopoly.
Erm, well, this sort of already happened. The 2008 banking crisis meant banks were bailed out by the state, though they didn’t have a monopoly.

6. Centralisation of the means of communication and transport in the hands of the State.
Hell, no. We already have the NSA and GCHQ spying on our online activity, shattering our illusion of privacy. Transport is an iffy one. Privatisation of public transport such as the railways may have been cheaper to run and to travel on in the UK, but it wasn’t always efficient.

7. Extension of factories and instruments of production owned by the State ; the bringing into cultivation of waste-lands, and the improvement of the soil generally in accordance with a common plan.

‘Owned by the state’ doesn’t sound good to me. Cuba comes to mind. Totalitarianism reminiscent of Equilibrium.
8. Equal liability of all to labour. Establishment of industrial armies, especially for agriculture.

9. Combination of agriculture with manufacturing industries; gradual abolition of the distinction between town and country, by a more equable distribution of the population over the country.
I’m not seeing how he first part is possible. There’s definitely a need to redistribute of the bottom heavy population of the UK. South East England, including London, are so overpopulated that infrastructure is struggling and things like drinking water are harder to come by.

10. Free education for all children in public schools. Abolition of children’s factory labour in its present form. Combination of education with industrial production , &c., &c.
This has already happened in Western countries.

“Well, I’d say Karl Marx designed one of the most powerful and influential economic and social philosophies of recent history, and I don’t know whether I’ve done anything quite at that level yet.” – Russell Brand, The Guardian

I should probably talk about Russell Brand’s recent political epiphany. Revolution is his remarkably Marxist political manifesto. Articles by and about him in the Guardian painted a vivid picture of his personality at this time. He’s a man who’s realised his shallow life is empty of meaning, that should he die he has no legacy and no respectable reason to be remembered in history. This epiphany was sparked by his short relationship with Jemima Khan. Unfortunately he appears to have grabbed onto an ideology with the passion of a zealot without really thinking out his agenda or researching it properly before publicly airing his half-formed opinions and arguments. It’s painful to watch.

My own political awakening came in the form of feminism. However, I wouldn’t have dreamed of publishing a book on the topic without a compendium of research behind me. Brand comes across as someone who read a book or two, spoke to a few activists and then threw a book together with his trademark, dictionary-worthy vocabulary.

Claiming that he’s ‘ready to die for this’ was a particularly cringeworthy little moment I’d hope he’d like to forget. I don’t doubt his earnest desire to believe in something other than his own pleasure, but his addictive nature is showing. He’s unable to delay the gratification in showing the masses that he’s changed and now stands for something other than sex, drugs and rock ‘n’ roll. This is perhaps an innocent and naïve attempt to get people to like and respect him, to move past his historically distasteful persona.

While I applaud his personal growth I can’t help but point out the hypocrisy. He’s not yet practicing what he preaches. Being driven around in an expensive chauffeured car means he’s still insulated from the real world.

‘…a small section of the ruling class cuts itself adrift, and joins the revolutionary class…’

I guess Brand is one of those.

2 thoughts on “The Communist Manifesto by Karl Marx & Frederich Engels”