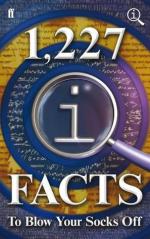 I used to be a boghandler, that’s ‘bookseller’ in Danish. If there are enough diamonds in the world to give everyone a cupful, why are they so expensive? Did you know Bram Stoker, author of Dracula, married Oscar Wilde’s first girlfriend? There’s a joke in there somewhere, I know it.

The point is, these 1,227 QI Facts are eye-opening, hilarious and just plain weird. Trivia isn’t for everyone but this is a great toilet or coffee table book, something you can dip in and out of whenever the mood takes you. And you know those awkward moments when you realize you’ve nothing to talk about when you’re stuck with someone you’re forced to interact with, well you can use the gems in these pages as little conversation starters. Just memorize a few.

At £0.20 for the Kindle edition, this was a steal. The only thing that could’ve made it better would be if Stephen Fry had written it.

Below are a few of my favourites – which seem to revolve around sex, death and books – are grouped into definitions & translations, literary facts and general trivia.

Words we need to read in romance novels:

Meupareunia n. Sexual activity enjoyed by only one of the participants.

Areodjarekput is an Inuit word meaning ‘to exchange wives for a few days only’.

Gymnophoria is the sense that someone is mentally undressing you.

Words we need to use in everyday life:

Eye-servant n. One who only works when the boss is watching.

Hemipygic adj. Having only one buttock; half-arsed.

Nomophobia n. The fear of being out of mobile phone contact.

The symbols used by !$%@ing cartoonists to indicate swearing are called grawlixes.

The pleasant smell of earth after rain is caused by bacteria in the soil and is called petrichor – from Greek petros, ‘stone’ and ichor, ‘the fluid that flows through the veins of the gods’.

Cockshut is another word for twilight – the time of day when chickens are put to bed.

Ultracrepidarian n. Someone who doesn’t know what they’re talking about.

Until the 19th century the English word for actors was ‘hypocrites’.

The road signs of the Austrian village of Fucking are set in concrete to deter thieves.

More than 50% of NASA employees are dyslexic, hired for their superior problem-solving and spatial-awareness skills.

The Dyslexia Research Centre is in Reading.

Fewer than 5% of blind or visually impaired people in the UK can read Braille.

25 million Bibles were printed in 2011, compared to 208 million IKEA catalogues.

2.5 million Mills & Boon novels were pulped and added to the tarmac of the UK’s M6 toll motorway to make it more absorbent.

Within 200 yards of the flat in Islington where George Orwell had the idea for 1984, there are now 32 CCTV cameras.

Oprah is ‘Harpo’ backwards. Oprah Winfrey’s real name is Orpah (after the sister of Ruth in the Bible) but no one could say or spell it properly so she eventually gave up correcting them. [Harpo is the stepson of Oprah’s character in the film adaption of Alice Walker’s The Color Purple.]

The Malleus Maleficarum, a 15th-century treatise on witchcraft, warned that witches stole men’s penises and kept them in birds’ nests.

In online dating sites you are more likely to come across a teacher or lecturer than someone from any other profession.

Every year, a thousand letters arrive in Jerusalem addressed to God.

Casanova was a librarian. 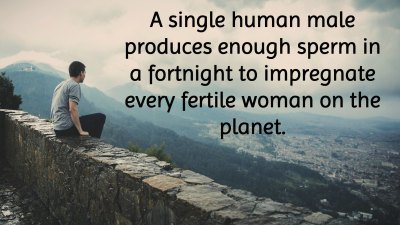 Every human being starts out life as an arsehole: it’s the first part of the body to form in the womb.

In the 19th century, [doctors literally ‘blew smoke up your arse’ (rectal inflation)] to resuscitate the drowned.

The penalty for adultery in ancient Greece involved hammering a radish into the adulterer’s bottom with a mallet. Radishes were a lot longer and pointier in those days.

Sucking a king’s nipples was a gesture of submission in ancient Ireland.

More than 50% of koalas have chlamydia.

Male fruit flies rejected by females drink significantly more alcohol than those that have had a successful encounter.

A female ferret will die if she doesn’t have sex for a year.

Vatican City has the highest crime rate in the world. Though the resident population is only just over 800, more than 600 crimes are committed there each year.

Aerosmith have made more money from Guitar Hero than from any of their albums.

Each year, drug baron Pablo Escobar had to write off 10% of his cash holdings because of rats nibbling away at his huge stash of bank notes.

St Vitus is the patron saint of oversleeping.

Italy’s biggest business is the Mafia. It turns over $178 billion a year and accounts for 7% of GDP.

Sudan has more pyramids than Egypt.

The US has only 5% of the world’s population, but almost 25% of its prison population.

In 1672, an angry mob of Dutchmen killed and ate their prime minister.

The Aztecs sacrificed 1% of their population every year, or about 250,000 people. They also sacrificed eagles, jaguars, butterflies and hummingbirds.

After George W. Bush was re-elected president in 2004, the number of calls from US citizens to the Canadian Immigration authorities jumped from 20,000 to 115,000 a day.

Modern homing pigeons find it more convenient to follow motorways and ring roads and turn left and right at junctions rather than using their in-built navigational abilities.

Most antibiotics are made from bacteria. And bacteria can get viruses.

2 thoughts on “1,227 QI Facts to Blow Your Socks Off by John Lloyd, John Mitchinson & James Harkin”