After scraping some money together and an awful lot of planning, I managed to take a trip to NYC for my birthday. Actually stepping on that plane was something I never thought would happen. Two weeks earlier my mother’s arthritic pain had reached a new high and she was due a knee operation. To ensure she’d be safe on her own for a few days, I put certain things in place and people to call should she have problems.

Arriving at Heathrow on Saturday was nerve-wracking. I’d be travelling out by myself since I was meeting my sister and family there on Sunday. Unfortunately, things didn’t go quite my way. Upon getting on the plane an hour later than scheduled due to mechanical failure requiring a switch to a plane without a working in-flight entertainment system, I was immediately asked if I would swap seats so a father could sit with his children. I happily complied, gaining an aisle seat out of it. Only I didn’t notice that I was now sitting in the same row as the mamas and babies. No sleep was had. I counted down the hours until landing after finishing my book less than an hour in.

At Passport Control, I was grilled for I don’t know how long on who I was staying with, why I was travelling, where I’d be staying and my occupation. That last seemed to be an issue. “I care for my mother,” I said. “Nothing else?” “No.” He cycled through the whole list of questions again. Finally, I snapped “The government PAY me to look after my mother.” “Oh, I’ve never heard of that before.” Maybe it was because I was a young female travelling alone, perhaps looking desperate for money to pay the bills? I don’t know.

Queueing for a taxi was tedious, but the white-knuckle ride was worse. I had no idea New York City drivers were so bloody aggressive. I’d not be surprised if nasty accidents took place on those roads on a regular basis.

Pulling up to the hotel in one piece was a relief. Almost there. Check-in required a credit card for incidentals. I handed over a brand new one specifically designed for overseas spending. It was declined. Wait, what? I’d notified them of my travel plans. How could they think something dodgy was going on? Luckily I had another on me. After that blow, I was offered free Wi-Fi if I’d just sign up to the hotel’s membership scheme. I refused. I figured paying would get me to a bed faster.

A leopard print daybed. Just what every hotel room needs.

Face-planting on the bed, I pulled out my phone to reassure my family I was still alive. That’s when I noticed my brand new Samsung Galaxy S6 had not connected to a network. The next few hours were spent frantically getting it to work, searching for possible fixes online. I eventually gave up and searched for the nearest T-Mobile store. There was one at the end of the block that would open at 10 am the next morning. Score!

On waking at 05:30 EDT, I noticed my sister had suggested Skype to call home. I signed up to their free trial and complained to my surprised mother. This was a horrible mistake. I should never have got on that plane. Things will only get worse from here. Optimism had deserted me. Wise words poured from her mouth. Hanging up, I had an impromptu bath since I couldn’t figure out the shower, threw on a pretty dress, enjoyed my room service pancake breakfast, then headed out for a walk through sunny Central Park. On my way back I stopped at T-Mobile. They couldn’t figure out why my SIM wouldn’t connect so I ended up paying a mighty price for a short-term US SIM with international calls as part of the package. 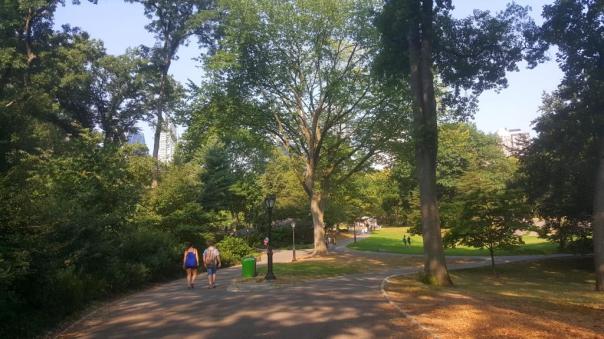 A surge of relief flooded me. The tide was turning. Things were getting better. I was to be picked up by my sister’s aunt in an hour or so. She was driving down from Boston with her family. I just had time to take a quick look at Times Square round the corner before checking out. However, that hour’s wait turned into four when an accident resulted in a 10-mile tailback. In hindsight, I should’ve explored some more instead of holing up in the hotel lobby where employees were joking that they still had rooms if my ride never came. 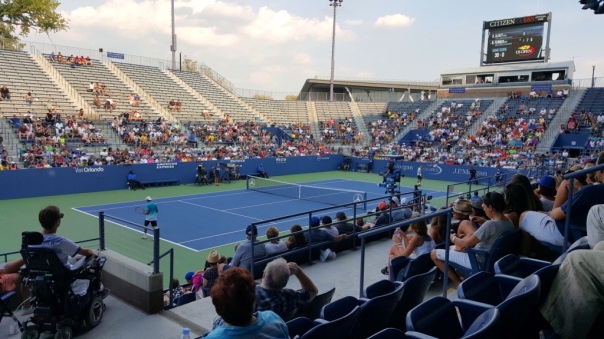 After meeting my sister, brother-in-law and adorable 7-month old niece at the spacious East Village apartment things got a lot better. We ate dinner at Fette Sau BBQ in Brooklyn where the pulled pork was delicious. A line formed out the door not long after we arrived so the food must be good there. I spent my birthday at the US Open Tennis Championships in Queens where I saw Tsonga win his match while scorching in the 34ºC / 93ºF heat. We visited Staten Island so we could see the Statue of Liberty on the ferry and ate at Katz’s Delicatessen of When Harry Met Sally fame.

Home time rolled around quite quickly. It was only a 4-night trip. I was a little sad to be leaving. I realised I actually liked Manhattan better than London. I loved the gorgeous street art and the air conditioning on the spacious subway trains. London’s tube is cramped, stifling and stinks in hot weather.

Annoyingly, our night flight home was delayed by two hours. Some sleep was had together with a light snooze in the taxi to my sister’s house. And this is when the true nightmare began. Buckle up, folks.

As soon as I got out of the taxi, I immediately noticed my car missing from the spot I’d parked it in. Someone had stolen my car.

My brother-in-law phoned the police. Apparently it wasn’t stolen, the council had kidnapped it and held it to ransom for £425! They’d towed it believing I hadn’t parked it properly. We go to the pound, but they wouldn’t let me take the car because it’s in my mother’s name even though she can’t drive. That’s how it goes if the disabled person needs a car but is unable to drive here; their carer is a named driver.

I didn’t have a copy of any paperwork linking me to the car and since my mother doesn’t have any photo ID, I had to take a train and taxi home to get a copy of the insurance documents, then come all the way back. (I had photos of them on my old phone, but not the new one). They charged me £65 for the penalty notice, £200 for towing and £40 per day storage.

That road is very quiet so the only thing that makes sense is if someone told on me. It wasn’t like I’d parked in the middle of the road or was blocking a driveway so I still don’t know why it was towed. I’ve never had a problem here at home. London must have stricter rules.

I’d only driven to my sister’s as the trains never run into London on the August Bank Holiday, and I figured it would be too expensive to leave it in airport parking. How wrong I was.

I finally got home at 20:00 when I would’ve been home by 13:00 if this hadn’t happened. That night, I just ate something, turned on the TV and fell asleep. I woke up at 4 am wondering why my light was on and why my mouth tasted bad. I hadn’t brushed my teeth since Wednesday morning (it was now Friday morning) as I forgot to brush them on the night flight home.

So, despite this being the most expensive holiday ever, I enjoyed New York. I’d definitely go back. But I’ll be leaving the car at home next time.